Ableism gets a 3 week run at the Malthouse theatre

I was deeply troubled seeing The Real and Imagined History of the Elephant Man on opening-night at the Malthouse, and not because it made me feel uncomfortable in a way that got me to question how I was viewing the disabled body but because at its core this play perpetuates ableist beliefs and does not encourage the audience to deeply examine them.
It begins with a woman inviting us almost into the freakshow, to see Joseph (played by Daniel Monks), this would have been interesting and intriguing if the narrative of who holds the power of the othering gaze was really interrogated and used to surprise and challenge the audience but it wasn't.
''Monstrous'', ''subhuman'', ''other'', ''alone''. Were just some of the words that I picked up which repeated over and over again in relation to Joseph. Not to mention the use of the R word and the M word which doesn't need repeating.
The fact that Joseph decides that he is a species of one, outside humanity, alone in the snow in the final scene of the play, does as this review above suggests, places him squarely outside of humanity, in a way that does not get the audience to question what othering does but positions people with disabilities as inherently as ''the other''.
What reviews of this work have also failed to mention, perhaps because they do not know, is that some of us in the disability arts community, heard that this play was being made by two able-bodied white men, written and directed by them, and were, with a lot of lobbying from a disability arts organization, ‘invited in to have a conversation with the director’. I attended one such conversation before the play had been written and talked about how writing such a narrative from an able-bodied perspective could lead to further othering, stereotyping and ableism towards people with disabilities. At this point an able-bodied actor had already been hired to play the lead, it was some months before they backtracked and hired Daniel and invited Kate Hood and Emma J Hawkins to be part of the production. Kate and Emma are friends of mine so it is hard to take a position which is critical of this play when I know they have worked so hard on it personally, and yet I feel like I have been silent too long about this.
I wonder at the few moments of speaking back to assumptions which this does play have, like tiny glimmers of hope, for instance when Emma J says ‘’why be normal?’’ Amongst this tiny interjection of hope it's a really dark scene where Joseph is positioned on a chair, stripped down to his underwear, and poked and prodded with large sticks by the nurses as they point out the ‘monstrous’ ‘abnormal’ parts of his body. In this scene Daniels impairments are also highlighted. After Emma askes this question the scene goes black and we move on. I wonder if these small moments were because Kate and Emma were ‘permitted’ to be in the writing room, perhaps this is the only pushbacks against the ableist narratives that they were able to get in? 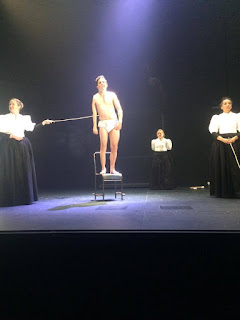 The lead character being a disabled person is indeed groundbreaking, but it also makes those of us in the disability community scared to critique it or hesitant, as I have been, because we see authentic casting so rarely that we don't want to call out a production that has done this because perhaps in the future maybe it will be a person with a disability writing the next play and directing it and maybe then we'll see a more nuanced, complex and proud storyline that really does unpack disability stereotypes and change the way the mainstream view disability. But sadly, this play is not it, it just reinforces them.
There is one thing that I'm sure of, this play and peoples critiques of it will highlight where they are regarding their engagement with disability politics and representations of disability.
When I wheeled out of the theatre on opening night I was not angry, I was just full of despair, and sadness, saddened that ableist narratives told by nondisabled people are being given a 3 week run on the main stage at a prominent venue in 2017. We can do better then this. Much better. We must if we are to truly change things.

I want to go down- Spoken word poem